Hold On to Your Hat Photo! 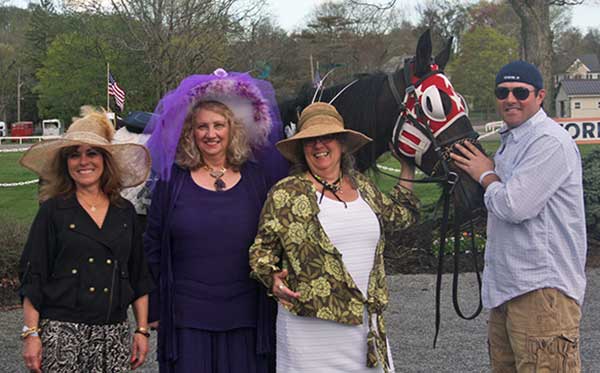 Order your photo(s) of your memorable Ladies Hat Contest experience at Goshen Historic Track’s 5th Annual Kentucky Derby Day Party. It will be a keeper! Track photographer Geri Schwarz will send you a print.

An 8 x 10 print is only is $25. An 11 x 14 is $50.00. There is $3.00 postage and handling on all orders. If you want something different in terms of size or finish, just email or telephone Geri and tell her want you want.  To make it easy, we have a PayPal account that will also accept major credit cards.

ORDER YOUR RACING PHOTOS NOW! USE THE ORDER FORM BELOW.

After every race, you will always find Geri Schwarz at Goshen Historic Track’s Winners’ Circle. She has been the official photographer at the Track since 1998 and at Monticello Raceway since 2008.

Geri began her career in photography at Monticello Raceway, circa 1981.  Since that time, she has photographed conventions, weddings, dog shows, horse shows, and the like, but her main emphasis and love has been for the Standardbred horse.  Geri will admit, without hesitation, that much of her “picture money” has gone to support her retired Standardbreds, beginning in 1988 with Belle Gay Jigger, her riding horse for 25 years.

Geri Schwarz’s photography is available for purchase using the order form below. The Goshen Historic Track is very grateful to Geri for all of her artistry and support over the years.

A Few Samples of Geri’s work: