There was fun for all at our Holiday Experience

Thank you for joining us!

Everybody enjoyed sitting next to Santa and visiting with Mrs. Claus and taking pictures. They also had the opportunity to write a letter to Santa and drop it in the mailbox for him.The Boy Scouts sold their wreaths and kids of all ages enjoyed visiting with John McDermott’s horse William McWhiskers.

We wish everyone a happy, healthy Holiday Season! 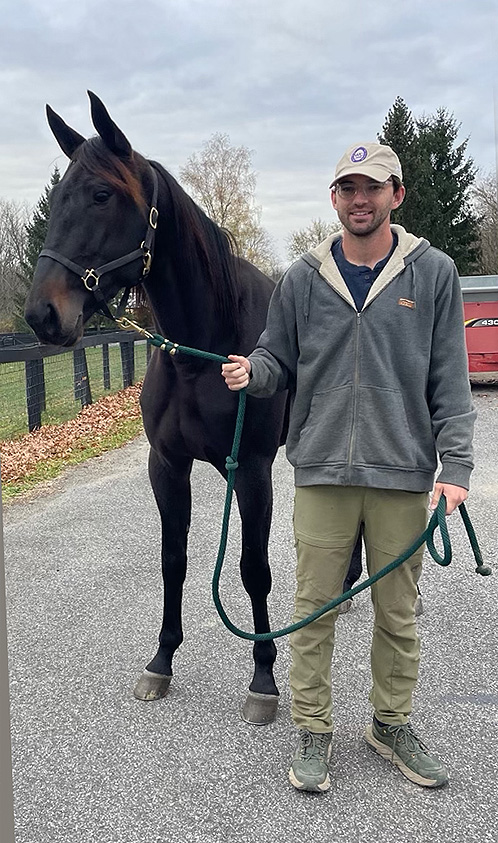 Venerable 2,1:52, the 2021 Dan Patch 2-year-old Trotting Filly of the Year, winner of the 2021 Mohawk Million, Jim Doherty, Peaceful Way, NJSS Final, and Hambletonian Oaks elimination in 2022, has been sold to Cameo Hills Farm.

Venerable is Walner’s richest performer, and she retires with earnings of $1,187,339.

These fillies join Check Me Out, You Ato Dream, Hey Blondie, Mazzarati, Whose Blues, Violet Stride, Check Out Trixie and other top trotting fillies owned by Cameo Hills Farm.

King Of The North gets his ‘Crown’

Milton, ON — Off his 28-1 powerhouse performance in the elimination, King Of The North followed that effort with total destruction of his competition to win the $600,000 Breeders Crown 3-year-old colt trot on Saturday night (Oct. 29) at Woodbine Mohawk Park. 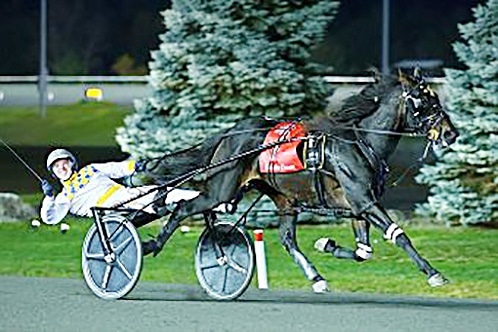 Driver Mark MacDonald hustled King Of The North to the lead to a :26.2 first quarter with World At War Deo in second and Cool Papa Bell third. MacDonald didn’t hit the breaks up the backside and clicked the half in :54.3 as Cool Papa Bell angled to race first over into the final turn.

With King Of The North striking hot on the lead, MacDonald decided to let his charge “go down swinging.” He spurted by three-quarters in 1:22.1 and punched the wind out of his competition’s sails through the lane to register a 4-1/4 length victory in 1:50.3 and smash the stakes record, as well as the Canadian record he set just last week.

“I did not think I could relive the American Ideal moment again, where I just was asking a horse at the head of the stretch to please not stop. But it happened,” Mark MacDonald said after the race. “The first quarter was a little hotter. When the half popped up, I planned on tapping the breaks to the last turn to try and race Cool Papa Bell, because I didn’t like the one behind me. He just felt so good, I thought ‘You know what, it’s all or nothing now.”

King Of The North’s 1:50.3 mile crushed the stakes record of 1:51.2 set last year by Jujubee as well as the 1:51.1 Canadian record set by King Of The North in his elimination. The time also beats the all-age record for a trotting male and comes just a fifth of a second off the all-time Canadian trotting record of 1:50.2 set in 2019 by a then 4-year-old Atlanta.

The annihilation of his peers and the Breeders Crown hardware notched an eighth win on King Of The North’s 23-race card and propelled him to millionaire status for owners Schnittker Ward, Arden Homestead Stable, Nolamaura Racing and Steven Arnold. The victory also marked a continued turnaround for the Walner colt, out of former Ray Schnittker star trotting filly Check Me Out, who demonstrated high promise as a 2-year-old which had yet to reach fruition in his sophomore season.

“I didn’t know why it wasn’t clicking earlier in the year,” trainer Ray Schnittker said after the race. “He raced really good in Lexington and in the Canadian Trotting Classic. I kind of thought he was coming (around) but I didn’t think he was going to be this good. Now he’s showing what I really thought he was.”

Our 112th racing weekend was a winner, thanks to the magnificent standardbreds, horsemen, fans and Track personnel who kept the track and facilities in pristine condition.  The three day series of races on July 2nd, 3rd and 4th spanned the Village of Goshen’s annual Great American Weekend. The weather was perfect, too.

We Thank the Following Sponsors!

GOSHEN, NY –  On Hall of Fame Day (July 3), the Monticello-Goshen Chapter of the United States Harness Writers Association made their annual donation of $4,000 to Goshen Historic Track.
Track president Steve Jones accepted the donation from chapter president Chris Tully, while simultaneously holding the So Surreal gelding JD, who had just set the 1:52 all-age track record at the landmark harness racing venue.

“This has been a fabulous three days of racing, and the track is grateful for the decades of support from our local harness writers.”

Tully emphasized that, “Historic Track is a grand institution to so many fans and participants in harness racing. There were literally thousands of people here this weekend. We consider it an honor and a privilege to continue to raise money for both Goshen entities.” 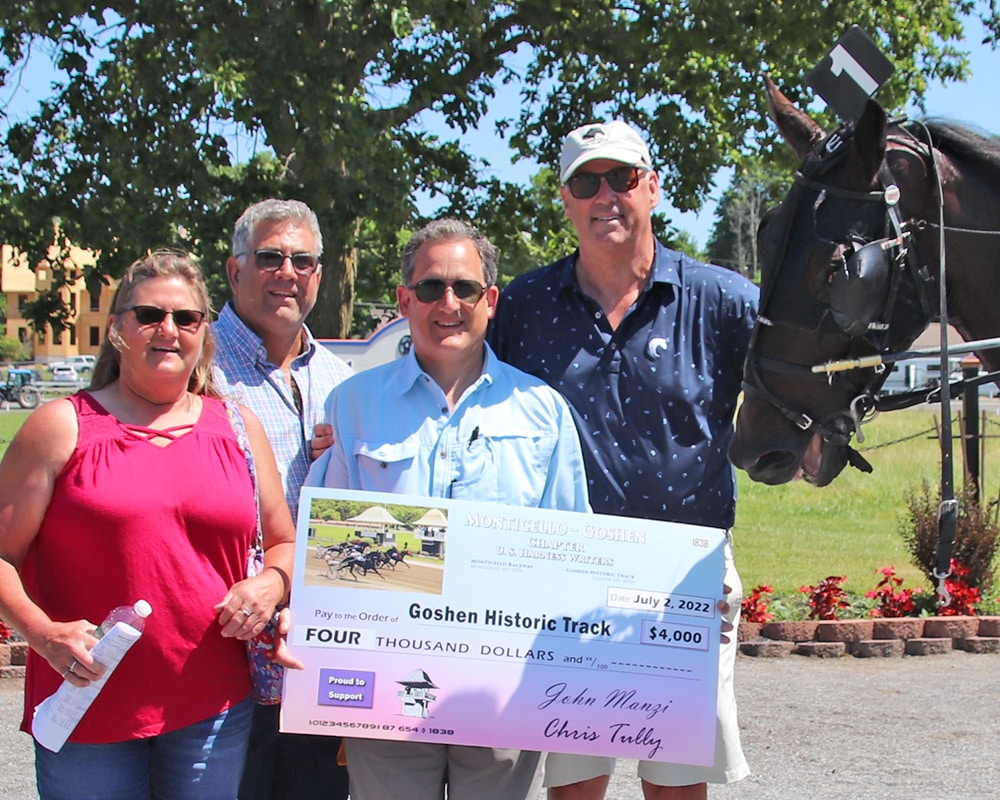 The organization makes annual donations to both Goshen Historic Track and the Harness Racing Museum & Hall of Fame, two separate and distinct entities that share the same hallowed ground and a mutual purpose of preserving and promoting harness racing. The practice of raising money and donating funds to Historic Track and the Hall of Fame began in the mid-1970s with Monticello Raceway publicity icon John Manzi, and has continued ever since. In just the last 20 years, the local Monticello-Goshen chapter has donated well over $100,000 to these important industry preservationists.

And the Raffle Winners Were…

Goshen residents Michael and Kaleena Arbuco won this year’s raffle. Here they are enjoying the tour they won from our July 4th raffle, of Steve Jones’ Cameo Hills Farm in Montgomery.

Kaleena also got to meet Billy Jean, our resident Donkey while on the tour.

We thank them both for their support of Goshen Historic Track, and hope they enjoyed their afternoon at the farm! 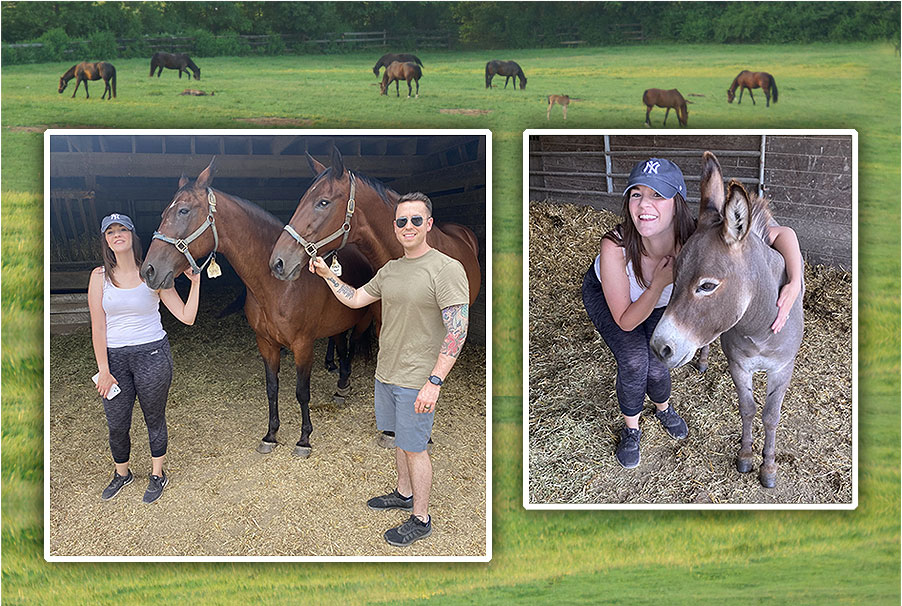 Orange County Fire Police shines with a tradition of its own

As promised, some of Orange County’s finest delivered a different kind of  horsepower to our track on their  Sunday, May 22nd  event. It was the Orange County Fire Police 5th Annual show at the Home of the Trotter. Vintage cars of all ages, styles and colors lined up on our historic track to show their stuff. It was family fun to travel down Memory Lane and admire the beautiful restoration efforts of so many gifted mechanics and automotive restorers. 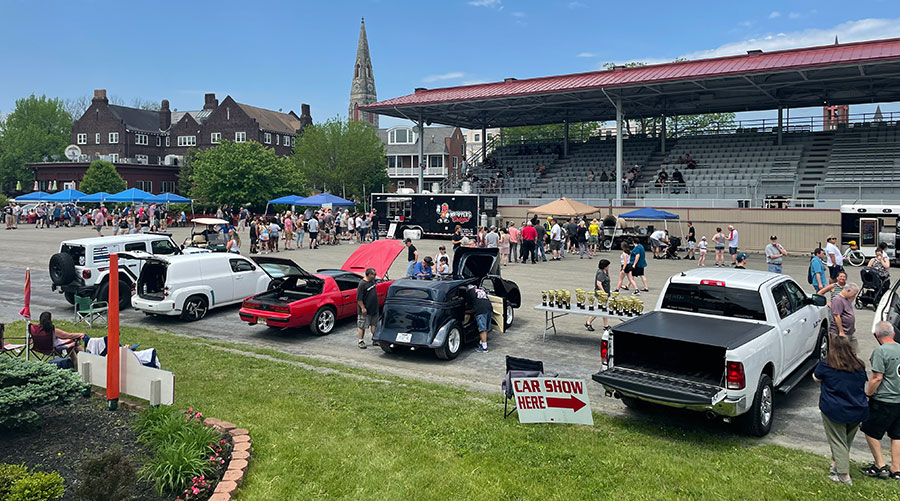 Visitors were also treated to the delicious food and fabulous desserts offered by food trucks catering to everyone’s tastes and appetites. Music was provided by DJ Hot Rod.

On hand to capture some of the excitement of the day was Goshen Historic Track’s Executive Assistant Jill Omen.  Beside taking photographs, Jill covered the event with this Facebook video!

Thank you so much to everyone who participated!  – Auxiliary of Goshen Historic Track 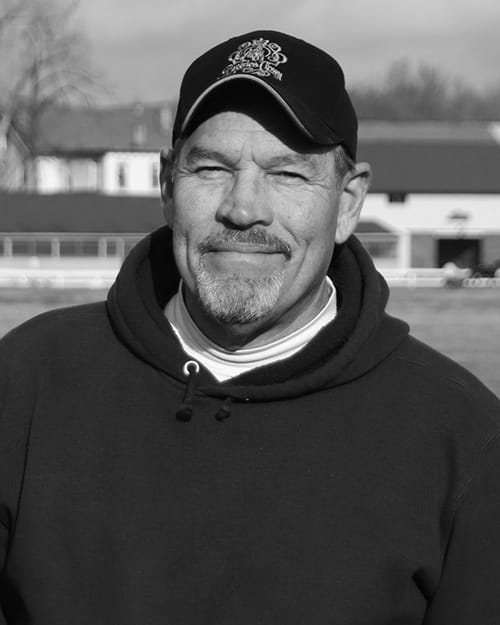 Eddie Glick is the Facility Supervisor at Goshen Historic Track. A lifelong area resident, Glick has been working at the ‘Cradle of the Trotter’ for seven years full time.

“I have been working the track itself for over twenty years,” noted Glick. “I used to help out during the Grand Circuit and during snow storms part time.”

But now Glick oversees all the operations at the racetrack and training facility. Capable of housing 108 racehorses, the training center is home to about 50 head during the winter months. When Glick is not working the harrow or adding water to the stone dust he ensures that the shaving bins are full and that the manure bins are neat and tidy. In addition to the daily maintenance of the facility, Glick has also played a key role in several large projects around the backstretch.

“We renovated the Arden Barn extension, completed the Fleming Barn and performed a complete remodel and renovation of the grandstand. The seating area received a complete water proof liner that now protects the entire lower level from the elements.”

At 110 years old, the Goshen Historic Track grandstand is always in need of some maintenance, and Glick has also overseen the renovation of the interior lower level offices to protect from past water issues and age-related deterioration. In addition, the roof of the Grandstand as well as the infield Judges Stands, have been replaced in the last decade.

Of course, with many racetracks being built on the lowest, and often soggiest, sections of town, Goshen is no exception. “We have a constant battle with the elements to eradicate water from the track during the winter months. Many tracks were built on
wetlands, and this track is definitely in a soup bowl,” Glick says with a chuckle. “The infield has a clay base so it does not shed water too well.”

So what’s next on the agenda? “We want to address the aging tote board in the infield. That needs some TLC, for sure,” noted Glick. “And we are also improving the floors and some of the substructure in the race paddock. New concrete is being poured, with new posts and fresh lumber and paint applied as necessary. There is always something to fix. We must make the racing a great experience for everyone.”