We Are the World’s Oldest Active Harness Racing Track

Goshen Historic Track boasts over 181 years of sporting tradition. The famous half-mile oval has hosted some of the greatest standardbreds including Messenger, after whom the great oak tree at the head of Historic Track’s stretch run is named, Uhlan, Speedy Rodney, Greyhound, Titan Hanover, Proximity, Tassel Hanover, Star’s Pride, Matastar, and Goldsmith Maid. Hambletonian, a grandson of Messenger, was shown here over a century ago. The list is a who’s who of standardbred racing.

Historic Track is the oldest active trotting track in the world. It was the first half-mile track to host a sub two-minute mile (Greyhound’s 1:59 ¾ in 1937), the first track in New York State to have pari-mutuel betting and the first half-mile track to join the Grand Circuit in 1911. That year, Mrs. Mary Harriman donated the grandstand. Thousands of racing fans have watched the greats of harness racing from that grandstand. Historic Track is certainly one reason why Goshen and the surrounding area are known as “The Cradle of the Trotter”.

Although Historic track flourished under the stewardship of the Harriman Family and the Orange County Driving Park Association for over 85 years, the time came in 1979 to pass the reins of responsibility to a new group, Goshen Historic Track, Inc., a non-profit organization dedicated to the preservation of Historic Track as a working facility for horsemen from all over the region as well as a cultural, convention, concert, and community center for the people of Goshen and the surrounding Orange County.

In 1966, the National Park Service designated Historic Track as a Registered Historic Landmark. The Track was the first of only two sporting sites in America to be so designated. Churchill Downs received a similar distinction 22 years later in 1988. The Track looks to the future when its grandstand will be filled with not only racing fans but concert goers, craft exhibitors, and people from all over the area who just want to relax and enjoy the setting.

Goshen Historic Track is unique. It stands alone as an entity that combines the best of the old with the prospects of the new, the glories of the past with the promise of the future, tradition with innovation. At Historic Track the future is more than just “now”, it is today and tomorrow. 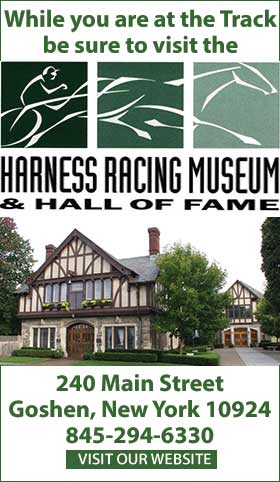