Please have your Vaccination Card available.  Those who are vaccinated will have the option to remove masks.  We will have two sections in grandstand for vaccinated and unvaccinated guests.  Unvaccinated children with vaccinated parents must wear masks in Vaccinated section of the grandstand. Please maintain a 6 ft. distance.

We will continue to post updates related to COVID-19 protocol as they become available.

We’re glad to be back pacing and trotting. 2020 was a tough year for all of us. We’re just hoping you will join us in our 111th year of harness racing. Can you believe it? Of course we will still need to take a few health precautions, but not so many that will dampen our fun. Please join us for 3 days of fun for the whole family! All races start at 1:00 pm, rain or shine!

The drawing consists of the following 13 prizes:

Many thanks to all who participated. See a list of the winners!

Yonkers, NY — On Dec. 5, the Board of Directors of the Standardbred Owners Association of New York (representing competing horsemen at Yonkers Raceway) resolved to donate the sum of $5,000 to the Goshen Historic Track located in Goshen, N.Y.

The contribution, which was mailed today, was in recognition of not only the important place the venue holds in our industry, but also in appreciation for the oval’s significant role in assisting racing participants in the midst of the COVID-19 pandemic.

During a truly dark Spring for pari-mutuel harness racing in New York State, a bright shining light was provided through the kindness of the Goshen Historic Track trustees. First, through the trustees, SOA of NY director Ray Schnittker was able to utilize the facility to accommodate an initial number of qualifiers. These races not only prepared horses for their anticipated return to live racing, but also provided necessary charted lines for the horses, as the USTA sanctioned the events for this purpose.

After the USTA’s approval, the kindness shown by the Historic Track’s personnel and the necessary approval of the track’s President Steve Jones allowed for weeks of qualifiers to be held.

The SOA of NY cultivated volunteers to collect fees and helped defray the costs associated with the effort in order to provide a starter, racing office personnel, a USTA qualified presiding judge, along with associates and a paddock judge. A teletimer was installed and a company was secured to monitor its proper function on a regular basis, as was a track re-measuring protocol completed. Additionally, the USTA provided an online entry portal and both an ambulance service and disinfecting company were hired.

Wednesday, November 11, 2020 – by Chris Tully for the Monticello-Goshen Chapter of USHWA

Continuing a tradition that has endured for more than half a century, the Monticello-Goshen Chapter of the United States Harness Writers Association made their annual donations to the Harness Racing Museum & Hall of Fame and to the neighboring Goshen Historic Track. 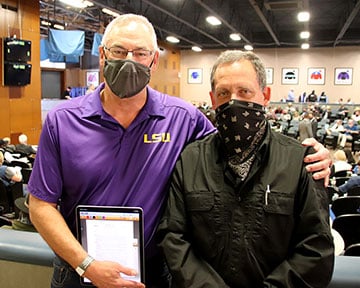 Jones stated, “We truly appreciate the consistent and generous support of our local harness racing writers.  They help us to continue to operate during these difficult and unprecedented times.  We lost considerable revenue with the postponement of our regular Grand Circuit meet in July, so these funds could not have come at a more crucial time.”

“The Harness Racing Museum is fortunate to have such a dedicated group of writers that have consistently raised thousands of dollars annually on our behalf.  Absent much of our primary fund-raising efforts this year, we are grateful that Monticello-Goshen Chapter had sufficient prudent reserve to continue their enduring doctrine of benevolence.”

Forced to postpone the annual Hall of Fame induction ceremony until 2021, and coupled with New York’s current pandemic restrictions, the Museum has remained closed through much of 2020.

In addition, due to current social distancing requirements, the Monticello-Goshen Chapter will be unable to hold its 62nd annual awards banquet this year.

The practice of raising money and donating funds to Historic Track and the Hall of Fame began in the mid-1970s with Monticello Raceway publicity icon John Manzi, and has continued ever since.

Fortunately, due to the generosity of the chapter’s past sponsors and advertisers, the writers were still able to give $3,000 each to the Harness Museum and to Goshen Historic Track, two separate and distinct entities which share the same hallowed ground and a united mission to preserve, protect and promote Harness Racing.

Goshen, NY — Loyal Fox Hanover made his first win of the season a memorable one, winning Sunday’s $16,150 Landmark Stakes 3-year-old open trot by 4-1/2 lengths over Askmelater Hanover in a track-record 1:57.3 at Historic Track.  Sloanie finished third.

The previous track record for a 3-year-old trotting gelding was 1:58 set by Keenan in 2011.

“I wasn’t sure if he was going to get around the half-mile (track) but he liked it,” trainer Chuck Sylvester said. “He got around there very good. I’d say that was one of his best performances of the year.”

Loyal Fox Hanover had four wins and four second-place finishes in 10 starts last year, earning $76,118. He finished second in a division of the John Simpson Memorial and concluded last season with a victory in a division of the Liberty Bell. This year, though, he was winless in nine starts heading into the Landmark. 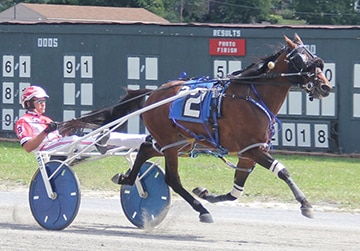 “We were pretty high on him all winter and he’s been pretty disappointing to us,” Sylvester said. “He could trot as much last year as he’s been trotting this year. For some reason, he didn’t pick up any speed. He’s just been steady. Last year, he battled every time. This year, he hasn’t tried very hard. Maybe this is what he needed.”

“I knew some of the horses I had were pretty good and I had some good post positions too,” Bartlett said. “But you can’t expect you’re going to win seven on the day, that everything is going to go perfect. I just was in good spots.”

Levine won by 6-3/4 lengths over 2019 New York Sire Stakes champion Cigars And Port in 1:54. He took the lead following a first-turn skirmish with Stop Action and Cigars And Port and rebuffed a first-over challenge from Cigars And Port on the backstretch en route to victory. Always On The Hunt finished third.

“He has really good gate speed,” Bartlett said. “He’s very quick and he’s very good in the turns. I knew when I got to the front as easy as I did that he would be tough to beat. He was very good. And Scott Zeron owns that horse, so I had a lot of pressure on me.”

Levine is owned by driver Zeron, who was unable to attend Sunday’s Historic Track races because of commitments at Harrah’s Philadelphia, which was hosting the Pennsylvania Sire Stakes championships and consolations for 3-year-olds.

Levine, a gelded son of American Ideal-Sangaal bred by Ken Solomon, has won four of seven races this year and five of 16 lifetime, earning $55,955. He is the points leader in the New York Sire Stakes Excelsior “A” Series.

Mullinax won his Landmark Stakes by 5-3/4 lengths over Stop Staring in 1:57.4. He’s A Snob finished third.

Fourth through the first half of the race, Mullinax charged forward from there and became the race’s fourth and final leader. 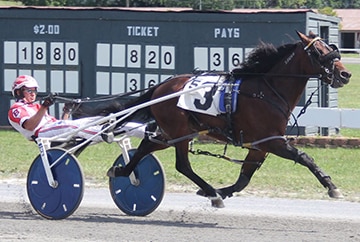 “He’s been very good,” Bartlett said. “I love that little horse. He got beat last week because he was very sick. I knew today that I just needed a clean trip. There was a lot of movement to the half and some of those horses were struggling in the turns. I attacked in the turn and cleared pretty easy. He won very easily.”

Mullinax has won three of eight races and $27,152 for owner Bill Varney. He was bred by Mark Ford and Ed Mullinax, who passed away in 2018. Ford trains the colt.

“He’s very versatile, quick, and has a great attitude,” Bartlett said. “I’ve been racing him from the front and today he won from off the pace just as well. He’s just a handy little horse and that’s what you need on the New York Sire Stakes circuit.”

Schnittker returned to the winner’s circle for the Landmark for 3-year-old filly pacers after driving Rodeo Beach to victory in 1:55.4. Flirty Forty finished second and Hurrikanemyshannon was third.

Rodeo Beach led through the first quarter before yielding the top spot to Flirty Forty, who guided the field to the three-quarter point. Rodeo Beach moved to the outside coming off the final turn and paced to a 3-3/4 length triumph.

Schnittker owns Rodeo Beach with Arnold and Bordogna. He bred the filly, a daughter of Somebeachsomewhere out of Wild West Show, with Charles Iannazzo. She is a full sister to Dan Patch Award winner Huntsville as well as six-figure earners Cowboy Terrier, Stevensville, Wild Bill, and Branquinho.

Credit Con held off a late charge from Seven Nation Army to capture the $12,000 Landmark Stakes 2-year-old open trot by three-quarters of a length in 2:00.4. Manuka finished third.

Cory Stratton drove Credit Con for trainer Todd Buter and breeder/owner Lee Sitto. The victory was the first for the gelding, a son of Credit Winner out of Jesse’s Con, in six career starts. He has won $31,080.

Sunday, September 6, Goshen Historic Track hosted the New York County Fair finals. The eight races, which each sported a purse of $10,000, for 2- and 3-year-olds of both gaits and sex divisions, ended the County Fair season at “The Cradle of the Trotter.”

Normally, the county fair races kick off July 4th weekend in Goshen, but due to the coronavirus pandemic, the races were held on the Labor Day weekend.

To qualify for the finals, the competitors needed at least five starts from the 14 County Fair tracks.

Due to state guidelines, the competitors didn’t have the fans to cheer them on, but that didn’t stop the races from being competitive. In fact, it came down to the final race to determine the NY County Fair’s top driver.

Leon Bailey, with his win in the 3-year-old colt and gelding pace with Mr Dunnigans (American Ideal-Legacy), moved to the top of the driver standings over Claude Huckabone III.

Bailey also made a trip to the winner’s circle with his own trainee, Miley Rose (So Surreal-Bellas Bliss), in the 2-year-old filly pace. After a hard-fought stretch duel, Bailey and Miley Rose, who is owned by Donn Lewandrowski and Gail Farrell, scored by three-quarters of a length over Jason Bartlett and Elegant Blue.

Bartlett ended up as the big winner of the day, taking five of the eight County Fair finals.

Bartlett also won on Sunday with Flexible Credit in the 2-year-old filly trot, who is trained by David Dewhurst and owned by Dewhurst and Philip Hale; Ready For Workout (Whataworkout-Oven Ready) for owner/trainer Earl Sauve in the 2-year-old trot for colts and geldings; Xenia’s Chip (Heston Blue Chip-Xenia Hanover) in the 3-year-old filly pace for trainer Jim Graham and owner Keith Pinkowski; and Crazy For CJ (Crazed-Godiva Lindy) for trainer Claude Huckabone III, who was the top trainer on the NY County Fair circuit for 2020, and owner Chasing Dreams Stable. The win in the 3-year-old trot for colts and geldings was the seventh straight for Crazy For CJ.

From the New York Sire Stakes