Goshen, NY – The Cradle of the Trotter had some “Rolling Thunder” of its own this Memorial Day weekend as 120 motorcycle enthusiasts helped raise over $2,000 to benefit Goshen Historic Track and the Harness Racing Museum & Hall of Fame.

The inaugural Iron Horse Poker Run, presented by the Monticello-Goshen Chapter of the United States Harness Writers Association (USHWA), enjoyed a capacity crowd of Harley-Davidson owners and riders, who participated in a 70-mile loop around Orange, Sullivan and Ulster counties.

Chapter Vice President/Secretary Janet Terhune noted, “The attendance was even better than we anticipated, and the riders really enjoyed touring the museum and learning more about Harness Racing and its considerable influence on American history.”

Attendees were treated to a delicious buffet before and after the ride in beautiful Haughton Hall at the Harness Racing Museum, the hosting venue.  Clubs such as the Blue Knights of New York XIV and Harley Owners Groups from Wurtsboro and Orange County also participated.

Several contingents came from as far away as Pennsylvania, Connecticut and New Jersey to “ride through the Gunks.”  The route also happened to pass by Standardbred nursery Blue Chip Farms, which is nestled in the shadows of the Shawangunk Mountain ridgeline.

Shawn Wiles, the Chapter’s Vice President/Treasurer, as well as the National USHWA President, was equally pleased with the outcome.

“Anytime you can raise money for the Track and Hall of Fame, and introduce new people to Harness Racing…it’s a ‘win-win’”

Door prizes from O’Tooles Harley-Davidson in Wurtsboro and the new Resorts World Casino in Monticello added significantly to the grand prize of $500 cash for the best poker hand.  Having enjoyed a great turnout, along with such overwhelmingly positive feedback from the participants, the prospects of turning the Iron Horse Poker Run into an annual event are stronger than ever.

The primary beneficiaries of the funds raised by the Chapter through this new affair, in addition to their annual Awards Banquet, have always been the Harness Racing Museum & Hall of Fame and Goshen Historic Track…two distinct entities that share the same hallowed ground and a mutual purpose of preserving and promoting harness racing. 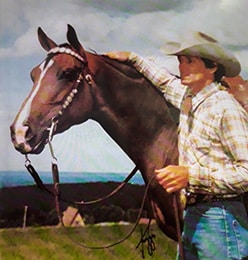 Passed away May 15, 2018, at Calvary Hospital, Bronx, NY.
Born August 29, 1941 to Philip M and Roselin Cable. They predeceased him.
Charles is survived by two sons, Tim Cable(Christy) and Tom Cable (Jody). Brothers: Philip H (Phyllis) Cable, Raymond (Patty) Cable,  and. Leon Cable. Sisters: Ruth Bales and Marilyn Thomas,  And Granddaughter, Charlee Rae Cable.
Also survived by several nieces and nephews and life partner Mary Shallenberger.
Charles was a well known and respected Farrier in Goshen, NY, Florida, Ohio and Michigan. He learned his trade from his Father and in turn passed that knowledge of shoeing to his sons.
A celebration of life will be held at the Goshen Historic Race Track on Saturday, May 19, 2018 at 12:00 noon. Officiated By Rev. DR. Lise Worthington.
All are welcome to attend.  In lieu of flowers,  memorials may be made to:
HARNESS RACING MUSEUM & HALL OF FAME, 240 Main St. GOSHEN, NY 10924
or GOSHEN HISTORIC TRACK, 44 PARK PLACE  Goshen, NY 10924
Burial will be in Effingham, IL at St. Anthony Cemetery beside his parents.