Goshen, NY – When the Directors of Goshen Historic Track met for their monthly business meeting, the Monticello-Goshen chapter of the United States Harness Writers Association (USHWA) presented the non-profit organization with a donation of three thousand dollars ($3,000). 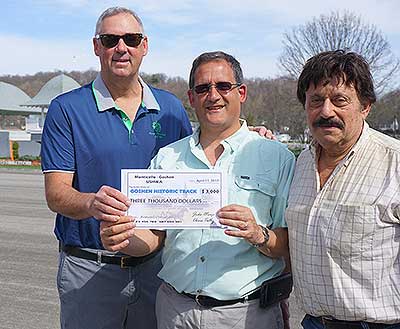 John Manzi, the driving force behind the chapter’s benevolent activities for the past four decades was on hand to make the presentation of funds.

“This is our Cooperstown!” the affable publicist proclaimed in his signature style.  “The track and the [Harness Racing] Museum are to Harness Racing what Cooperstown is to Baseball.  And we are darn proud to continue to donate to both of these important institutions.”

In just the last ten years the Monticello-Goshen chapter has donated well over $30,000 to the “World’s Oldest Harness Track.”

President Steve Jones stated, “The board of directors at Goshen Historic Track is grateful to the Monticello-Goshen chapter for their continued financial support.  These sizable contributions allow us to carry on with improvements to this National Historic Landmark…which due to its advanced age constantly requires renovation and updating.”

In preparations for the track’s 107th racing season, as well as to accommodate a few training stables arriving from down South, several ongoing projects were in mid-stream or nearing completion.  The largest undertaking is the painting of the century-old grandstand.

In addition, the BOCES barn has been completely re-sided and the floors of the stalls replaced.  Repairs to the Arden Clubhouse, the track’s operating office, are also in the works.