by Steve Jones with John Manzi 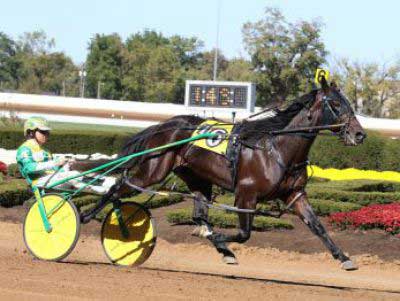 The colt may be a Pennsylvania bred but he has New York connections all the way. He was bred by Ray Schnittker  of Middletown New York & Charles Iannazzo of Tappan, New York , his co – owners, along with Ted Gewertz of New York, New York and Steve Arnold of Purchase, New York  He raised at Steve Jones’s Cameo Hills Farm in Montgomery, New York.

Huntsville’s career began at the Meadowlands on June 4, 2016, he debuted with a winning effort in 1:54.2, with a last quarter in 26.3 . He marched through his 2 year old season by winning three Pa. Sire Stake events, including the final in 1:51.1. He headed to Lexington and won the Bluegrass in 1:53 and the following week at the Red Mile, he tied the World Record for 2 year old pacing colts, winning the International Stallion Stake in 1:49.

After that it was back to the Meadowlands, where he won the Elimination and Final of the Breeders Crown, winning the final in 1:49.1 , a new track record for 2 year old pacing colts.  On the season, he had 7 wins and 4 seconds, in 11 starts with earnings of $ 689,814 and was voted the 2 year old pacing colt of the year by USHWA.

According to trainer and co-owner Ray Schnittker, the colt’s connections are aiming for the 2017 North American Cup at Mohawk Raceway in early June.

“But prior to that Huntsville will probably make his first seasonal start in the Pennsylvania Sires Stakes  on May 21,” Schnittker said. “Of course we’ll tune him up in qualifiers at the Meadowlands before he begins his 3-year-old season.”

Huntsville is by Somebeachsomewhere from Wild West Show by Western Hanover.